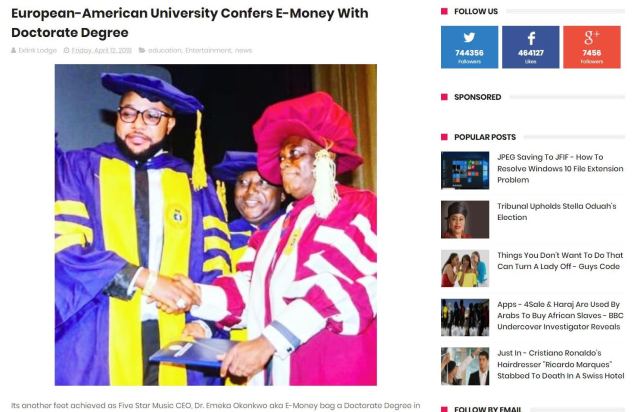 In the light of subsequent press coverage, the University wishes to state that there was no possibility of confusion in the bestowal of this award and that it was made clear to the recipient and to all others concerned that the awarding body was European-American University and no other institution. The evidence is shown in the coverage of the University’s award in the Nigerian press (Exlink Lodge, edition of 12 April 2019, available at the Internet Wayback Machine here) at the time of the award, on the certificate of the award reproduced below, and in the photograph above in which the recipient wears the academic robes that are specific to European-American University’s African graduation ceremonies.

The text of the article above reads as follows:

Its another feat achieved as Five Star Music CEO, Dr. Emeka Okonkwo aka E-Money bag a Doctorate Degree in Business Management & Corporate Governance. This is coming just two days after Unilag debunked a report that E-Money did not receive Honorary Doctorate Degree from their institution

Five Star Music has congratulated him and put up a new institution. According to a new post on Five Star’s official Instagram, the billionaire business man received his Honorary Doctorate Degree in Business Management and Corporate Governance from the European-American University.

“Congratulations to our chairman on his amazing achievement / Award Honorary Doctorate Degree in Business Management and Corporate Governance from the European-American University. Many more blessings and more grace as you go on @iam_emoney1 @iam_mrse @iam_kcee .. #itistoolatetofail” the post read.